For over 75 years, Birken Manufacturing of Bloomfield, CT,  has specialized in the manufacturing of complex aerospace jet engine components and utilizing processes such as CNC machining, Tig Welding, Conventional and NDT Inspection, Concurrent Engineering, and Assembly and Testing Services.  Birken supplies aerospace engine OEM’s worldwide.  Birken operates with just over 130 employees at a 65,000 square foot facility and is currently entering its 4th generation as a family owned business.

From left, Eric Schneider – Birken Mfg., Peter Teti-Pratt & Whitney, and Jason Bronson-Birken Mfg., at the AESQ Supplier Forum in Avon CT, April 10, 2019 where a joint presentation on AS13006 Process Control Methods was shared with approx.. 100 suppliers in attendance.

A couple of years ago Birken realized through quality data analysis that two key processes, milling and part marking, were the highest drivers of scrap and external customer escapes, respectively. Milling alone accounted for over $300K while part marking accounted for 84% of external customer escapes.  Birken thus launched two PFMEA teams to identify the critical failure modes, their causes and corrective actions that could have an impact on these quality metrics.

The Milling PFMEA team was a cross functional team that included Operations Management, Machinists, Manufacturing Engineers, and Quality professionals who met to create a PFMEA to identify every step of Milling Set-Up through First Piece Inspection and then the completion of a batch. The high RPN failure modes were looked at for their respective causes and process control methods.  One of the key AS13006 Guidance Document controls implemented was a visual checklist, similar to what is used by airline pilots and medical professionals.  This standard milling checklist, used throughout the plant wherever milling operations are performed, summarizes what an operator does before and during set up.  The checklist provides the operator a series of reminders of tasks to do during the running of all production parts. One example of a key learning for the checklist and process control is the use of shims or indicators to be sure that parts are seated and torqued properly before machining. During Set Up, the same check after machining validates that the part is not moving during the Milling.  The use of this process control, along with SPC being used to track the variation of product during the production run, has led to a 60% reduction in scrap due to the milling process. 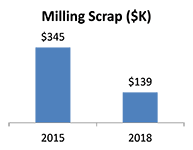 In the area of Part Marking, most companies in the aerospace industry can look to marking issues as a major contributor to escapes. Digits being incorrect or transposed, location of marking being incorrect, and content errors going back to when orders are entered are just a few examples.

For the corrective action on this process, Birken took on another cross functional team initiative utilizing PFMEA. Analysis of the causes of the high RPN failure modes led to several improvements. One improvement involved the layout of where the part marking on product is done. A designated inspection station in the marking area equipped with all applicable software, access, and specifications. Logging of marking inspection activities helped with the overcheck.  Another improvement involved developing a system to assure correct part serialization.  Incorrect serial numbers was one of the high RPN failure modes. A major improvement was the development of an electronic system which verifies serial numbers. The software prevents duplicating serial numbers, and verifies the proper digits are in place. For example, letters I, Q, and O are not allowed characters in most marking. The software returns an error message if duplications or wrong characters are used.  Part Marking process escapes to external customers was reduced by 94% with the controls added to the process. 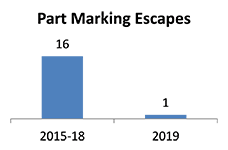 Along with the process controls used to improve both the Milling & Marking processes, Birken also employs the use of gage and process capability studies to help resolve measurement and tolerancing issues as well as the deployment of simple but powerful Defect Concentration Maps to look for patterns or trends of visual conditions when anomalies show up on parts.

In closing, Birken Mfg. has demonstrated to itself the power behind implementing the tools promoted by the AESQ document series.  And it will continue to do so far into the future.